Organisations are simply collections of people who are working, to a lesser or greater extent, toward a common set of goals.  While organisational policies often clearly define the actions to take in common situations, sometimes the context is exceptional requiring staff and managers to apply their judgement.  The aim is to achieve something consistent with the spirit of the policies leading to defensible decision that achieves the outcomes understood to be consistent with the aims of the organisation.

We are, however, also creatures of habit.

Using precedent is a way we navigate though complexity to manage the personal and professional risks associated with using judgement.  These socially circumscribed understandings then often become unwritten additions to the system for exceptions handling. Part of the culture. A part of the unwritten system.  Repeated and re-enforced through habit.

In this way, we have systems that learn and adapt to fill in the gaps through evolution.  Indeed, organisations are often better understood as living organisms rather than machines. Read any of Richard Dawkins books on evolutionary biology. But, is this evolutionary change always in the right direction?

All too often, the exceptional circumstances requiring judgement relate to people with complex presentations. When someone presents in distress, anxious and afraid, it’s easy for matters to escalate.  This might be just one of many times the person has presented at a service that day or week.  If they perceive themselves – rightly or wrongly – to appear scruffy or unkempt, then they might also feel some embarrassment. Distress, anxiety, fear, embarrassment, potential physical or mental illness, hypothermia, brain injury, or hunger – mixed with desperation – can easily become anger and aggression.

These circumstances are primed for behaviour that may then be symptomatic of a ‘fight or flight’ response. Hypervigilance, agitation, restlessness, aggression.  This response has its evolutionary base deep in the most ancient part of the human brain. The amygdala.

Situations such as this are a genuine dilemma for front line staff who are thrown into a potential void between policies. On the one hand, most people in public and third sector services empathise and want to help people.  They will recognise and aim to implement the spirit of the policies designed to assist them in providing that service.  But, exercising judgement in a situation of uncertainty often takes time.  Staff members too may respond in keeping with the evolutionary biology of their amygdala.  They may become frightened or irritated, their body language closed, their tone clipped, their voice louder. People may mirror and amplify each other leading to escalation. Or, one or the other person may become cowed, subjugated, and dominated. Either way, the temptation is to ask the person to leave, hit the panic button, or call for security.

Of course, it is also reasonable for people to expect to be free from the fear of abuse in the workplace. All staff will face these situations and it’s important that organisations promote the skills and techniques which help people control their natural ‘fight or flight’ instincts as well as those of others.

Richard Dawkins suggests that ideas and behaviours can themselves spread through a community, such as a workplace, through ‘memetic’ mechanisms and become normative as well as adaptive. Part of the machine. Part of the system. Such culturally circumscribed understandings may then be either assimilated into formal policies or find their expression in the undocumented attitudes and values of teams, departments, or whole organisations.

It’s interesting to see places where signs are erected with information such as; “Violence towards staff will not be tolerated”. I’ve seen that displayed in a GP practice recently. My hypothesis is that such signs also convey unintended messages that potentially make matters worse. Alternative interpretations include ‘this is not a safe place’. Or, ‘we might make you angry.’ These are not messages to allay people’s fears.

Signs setting out a zero-tolerance policy to customer distress are perhaps physical manifestations of a service that’s ill equipped to cope with complex presentations and is instead responding with its own ‘fight or flight’ mirroring behaviour. A traumatised service with an organisational version of the amygdala perhaps.  Or, a bold written expression of a culturally circumscribed normative behaviour arrived at through habitual repetition and memetic dynamics. 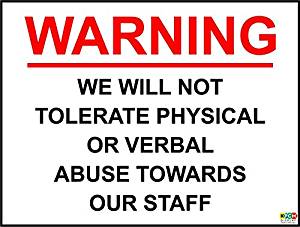 If there is a need for any such sign, I would prefer something that comes from a different perspective.  Perhaps something like: “Welcome.  We’re here to help you. We will be with you as quickly as possible.  Your patience is appreciated.”

Throughout my career I’ve had regular contact with people experiencing homelessness, mental ill-health, addiction or with histories of offending behaviour.  I’ve certainly faced challenging situations including rare physical threats and other forms of verbal abuse, but I’ve never been physically assaulted.

There are four short courses that have been among the most memorable and useful in this context.  It’s my view that they should be included in the induction for all front line workers with regular top up sessions as is often the approach for equality and diversity or first aid.

Together, these courses equip staff working at the front line with the skills they need to understand the person, express their empathy, and maximise the likelihood of success.  Together these courses enable people to see the warning signs, try to deescalate, then take the most effective action to get out of the situation if necessary.

We are creatures of habit. By understanding and implementing these approaches, we’re likely to develop a better, more effective response for people in distress.  The response is likely to be safer, more engaging, and promote better outcomes for people.

Through repetition, practice may then make these normative within the system as they spread through ‘memetic’ dynamics to become the accepted way things are done.

It might even save some money on unnecessary, ill-informed, and potentially counter-productive signage. 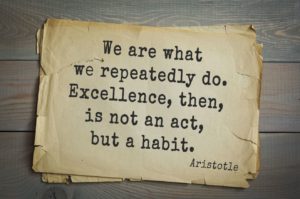