Evaluating the Evaluation: Reflections on the Importance of Evaluation in Fulfilling Lives

Mark Crowe, Research and Evaluation Coordinator at WY-FI has worked for the Fulfilling Lives programme for the last 8 years. In this blog, he reflects on the importance of evaluation within the programme.

I have been involved with Fulfilling Lives since the beginning, working with three different partnerships and lead organisations in West Yorkshire. There was so much that attracted me to the role – the focus on supporting the most disadvantaged and excluded people; a commitment from the funder to person-centred approaches and co-production; and an explicit link between practice and policy development.

I have spent a lot of my working life (which is roughly as long as the National Lottery Community Fund (NLCF) has been giving grants to good causes) writing reports that must be sitting in an office somewhere. The approach taken by Fulfilling Lives felt different. It has been a blend of analysing and understanding, influencing, measuring and 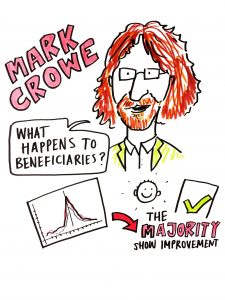 reflecting. Evaluation has been a long conversation – not just an “after the fact” justification but a dialogue about what is best, what is right, what is moral and what works. It has been a whole series of ongoing conversations – with beneficiaries and people who have lived experience, peer mentors, volunteers and staff, stakeholders, researchers and academics, officers and elected members. Most importantly it has been an ongoing conversation with people doing the same job in the other 11 Fulfilling Lives programmes.

Evaluation, for many stakeholders means randomised control trials. We have not been working in laboratory conditions because the environmental factors have changed in unpredictable ways. The changes in services (two major national changes for probation services); the expectations around resources (the length of the period of austerity and the financial impact of Brexit); additional elections and spending reviews; and a major pandemic. The effects of such have shifted priorities in unexpected ways.

The decision by the NLCF that partnerships would be led by the voluntary sector has led to coalitions of the willing across all sectors. Their interest was stimulated through commitment to the ideals of the programme but has been sustained by being shown and participating in what was a radically different way of looking at an intractable problem. We are now in a position to say with some confidence what factors are associated with better and worse outcomes, and sometimes it has been appropriate to re-define whether an outcome is better or worse. We understand from the data much more about the journey those experiencing multiple disadvantage take; we are able to point to how the practice of services influences outcomes; and have been able to use this data to show how investment in services can be more productive.

Having a sizeable cohort (in West Yorkshire we supported over 800 beneficiaries) has helped identify where future research efforts should be placed. On a local level, we have been fortunate to secure the support of the Office of the Police and Crime Commissioner and the Integrated Care System (ICS) at the highest levels. Having seen the work we have done they have responded to our findings that the causes of multiple disadvantage and exclusion are likely to start in childhood/ early adulthood. The West Yorkshire Multiple Disadvantage Consortium (what was the WY-FI Core Partnership Board through Humankind) has been commissioned by the ICS to map services supporting people who have experienced trauma and adversity through the whole life course. The mapping is a foundation of the ICS strategy to become trauma informed by 2030.

Working with this degree of freedom in designing and delivering a programme and its evaluation in a dynamic environment is not for everyone. I have been lucky enough to have colleagues and stakeholders in my team and the wider programme who I have been able to draw support and skills from. What has been remarkable has been the willingness of our funding managers at the NLCF who have joined the evaluation adventure with very open and enquiring minds and responded positively to our learning along the way.