A large virtual audience from as far away as Australia tuned in to our recent national evaluation webinar on the experience of prison release for people affected by multiple disadvantage. The national evaluation team were joined by Fulfilling Lives partnership staff, including three with lived experience of multiple disadvantage, as well as the Ministry of Justice. Over 200 people attended on the day, with many from statutory and charity organisations who work with this client group, which made it our best attended webinar so far.

I opened the session with an overview of the report recently published into transitions from prison for people experiencing multiple disadvantage (read the report here). It was important to get across that, although there are still many challenges with the prison release process for this group, particularly in securing suitable accommodation for release, there has been some promising practice in Fulfilling Lives areas to learn from. In particular, navigators (service-neutral support workers with small caseloads) liaise with different agencies and the client to help put bespoke release plans in place to meet prison leavers’ needs. Meeting the prison leaver at the gate on the day of release and supporting them to attend all of the necessary appointments appears to be crucial in helping ensure what can be a stressful and intimidating day go as smoothly as possible.

Christine Grover (Shelter) was joined by Earl Salter and Sameer Iqbal, both currently working as Support, Time and Recovery (STR) workers for the Prison Liaison Service. The Birmingham-based trio talked about the importance of having staff and mentors with lived experience to support people through the process of prison release. Christine explained that the STR roles harness the benefits of lived experience in support work and are based on evidence of how well this worked in the Birmingham Changing Futures (Fulfilling Lives) Lead Worker Peer Mentor scheme. This scheme demonstrated £2.1 million in savings to the public purse through a reduction in criminal convictions. Earl and Sameer both spoke passionately about their jobs and how they felt they could use their own experience of being in and out of prison themselves to support others to see that desistance is possible. Earl described this as ‘planting a seed of hope’, one that wouldn’t necessarily germinate right away but once planted, would always be there.

Next up was Sharon Sharman and Lee Dale from VOICES (Fulfilling Lives Stoke-on-Trent) who brought the challenges of prison release to life by talking us through a real-life example of how demanding a prison release day can be for people experiencing multiple disadvantage. In this case, which is not atypical, someone was released from prison and expected to attend multiple appointments in different parts of the city. Arriving at all appointments on time just wasn’t feasible, even travelling by taxi. The prison leaver was set up to fail. Sharon was clearly moved during her presentation by the comments coming through on the chat whilst she spoke, about how shocking this real-life case was and the disbelief that someone was given a release plan and schedule that was impossible to achieve. We heard that (perhaps unsurprisingly) as the prison leaver in this real-life case had no accommodation for his first night out of prison, he had to resort to rough sleeping and within a few weeks had reoffended and returned to prison.

The final presentation was by Robyn Casey and Lauren Withall from the Ministry of Justice who talked us through the Prison Leavers Project. This project shows that MoJ have recognised that prison leavers continue to face many challenges and addressing these is crucial to effective resettlement in the community and, ultimately, desistance from crime. £20 million has been committed to this project to enable local teams to gather evidence on what works in their area to best support people on release from prison.

There were many questions from the audience to all of the speakers, and the webinar was extended for those who were able to stay and continue the discussions. Thanks to those who gallantly delayed their lunch to keep the conversations going and get through a few more questions! The attendance at and engagement with this webinar clearly showed the shared commitment across organisations, sectors and roles to keep advocating for better support for prison leavers. One comment we received following the webinar sums this up nicely:

This is by far the best webinar I have attended in a long time! Lots of work based around issues I’ve been shouting about for years but no resolution seems to have been identified around here. This has motivated me to shout louder and facilitate changes for our service users. To action this I would be keen to share the webinar with colleagues. Thanks for organising this (Probation service officer)

The full webinar can be viewed on our YouTube channel; the first half is available here, and the second half here. 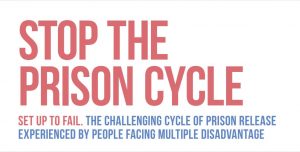 The Fulfilling Lives programme has been running a national campaign to Stop the Prison Cycle. As part of this campaign, people with lived experience of prison release have told their story to highlight the stigma and the never-ending cycle of being in and out of prison, as well as the positive impact of receiving the right kind of support at the right time. The campaign also has several recommendations for change to stop the prison cycle.